Some may think MPV segment is shrinking due to the demand of other cars in the different segment, but carmakers are in no mood to pay heed to these rumors. Mahindra has recently unleashed its first-ever MPV for the Indian market with the name Marazzo. The car slots between Maruti Suzuki Ertiga and Toyota Innova Crysta. I was also searching for an MPV in the price bracket of Rs. 10-13 lakh. Toyota Innova Crysta was beyond my budget and I don't like Maruti cars at all, so Ertiga was also out of my list. The only option remained was just recently launched Mahindra Marazzo which was getting overwhelming response across the country. The car was launched in September and for three months, the sales chart is in no mood to decline. The most striking thing that drew my decision in favor of this MPV is its sharp styling. Mahindra Marazzo is one such car from Mahindra in years with a clean design, solid and abuse-friendly build quality. The car has been developed from scratch by Mahindra North American Technical Center in the USA. It completely looks different from the rest of the Mahindra cars but still retains the traits of its maker. It seems Mahindra has studied so much about shark as not only the overall proportions of the car to look like a shark but the front fascia as well. The shark inspired grille and the new headlamp cluster with LED DRLs, all makeup to the sharp styling. Similar shark design language can be seen at the rear in the form of uniquely carved out tail lamps, perhaps the most striking part of this MPV. I particularly liked the way Mahindra has set up the cabin which is nice and roomy. The first two rows are spacious while the captain seats are just icing on the cake. What's more interesting is that the third row can be used by adults unlike other cars such as Ertiga in the segment. The interiors look clutter free and the beige and black theme blends well with the aesthetics. And surprisingly, the fit and finish of the textured plastic are excellent in certain areas. Some unique features in the car include rear air conditioner which has the blower duct running across the length of the vehicle with side firing vents. Then there is a 7-inch touchscreen infotainment unit which is slick to operate and comes with Android Auto and Apple CarPlay functionality along with integrated navigation. The 1.5L diesel engine is excellent in performance with good drivability. I am currently getting the fuel efficiency of around 12kmpl in cities which is acceptable to me. In terms of safety, dual airbags and ABS with EBD and all-disc brakes come as standard, so there would be no issues with safety. The only concern for a new car buyer would be the freshly baked MPV from Mahindra, so it would naturally draw away some buyers. But looking at the sales number crunching from all quarters, I don't think it would be an issue, it happens with every new car. So in my opinion, Mahindra has really come up with a fascinating product and I am really enjoying it. 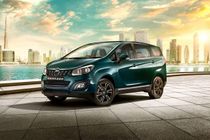