మహీంద్రా Alturas G4 Can It Play Safe Like XUV500?

Mahindra has recently rolled out its flagship SUV and created a storm in the Indian market. The car falls into the domain of stalwarts Ford Endeavour and Toyota Fortuner. This is really a big game being played by Mahindra as carmakers such as Hyundai tried its hands earlier with Santa Fe but couldn't match up to the competition. On the other hand, Skoda is also struggling with its Kodiaq which is hardly touching the 200 units per month. This has been a province of Fortuner and Endeavour for a long time with the former taking the lead. But can the new Alturas G4 play safe in this segment. Looking at first impressions online, I can say it promises a lot to the first time luxury SUV buyer. Starting with the price which the Indians are too cautious about, Mahindra Alturas top end 4X4 will cost Rs. 29.45 while both Fortuner and Endeavour lies in the expensive side of the spectrum with respective prices of Rs. 32.97 and Rs. 32.81, ex-showroom. So clearly, Mahindra Alturas G4 has an upper hand when it comes to pricing. Looks are subjective so I won't talk about that. In terms of equipment, all the three cars are loaded with plenty of features but here also Mahindra seems to have played a trick. The car comes with 9 airbags, a large 9.2-inch HD touchscreen infotainment, electronic sunroof (not panoramic) as well as electronic parking brake, ventilated seats, smart power tailgate, all which are missing in the rivals. Other comfort features in the car which makes it a true luxury are Nappa leather upholstery on seats, memory profile for drive seat and ORVM, door handles illumination, auto-fold ORVM, dual zone climate control and 360 degree around view camera. In terms of engine and performance, the 2.2L is no less than the other two with 181PS and 430Nm of peak torque paired with Mercedes sourced 7-speed automatic gearbox. So, overall considering the price, features and specs, I can definitely say this car will shake the segment and bring glad tidings for Mahindra. The XUV500 really tumbled the market upside down and still going great in its league. I think is going in the right direction as Alturas G4 has the capability of repeating the success of its younger sibling. For me, the new Mahindra Alturas G4, it's the bang for the buck. 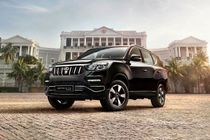