I feel that this car is rather a very perfect family car because talking about its mileage is around 25.1kmp/l at an average speed of 90 to 100 km/h so its engine is used friendly but a rather 1.3l which is of about 1248 cc si it generates Arun d somewhere around 88.5 BHP at 4000 rpm and 200nm torque at 1750 rpm and talking about the space for the legroom it has massive legroom so if you shift the seat fully towards back it very much left over for your seat. Talking about its features then it's got an electric stability program(ESP) and ABS and EBD. So it's a very loaded car. Talking about it its commodity it has automatic glowing headlamps with day running LED DRLs and it's got automatic rain-sensing wipers but it does not get its engine cap with a hydraulic pull. Now talking about its driver's seat comfort its stable finishing touches are nice and tidy to look on the smart play infotainment system. It Is quite decent with Android Auto and Apple CarPlay and it has got 4 speakers that are just giving so much output. It has a decent boot of about 500 to 550 Ltrs and it's a five-seater but accommodates around 6 people so it's a wide car indeed. The most specific area to talk is driving now the driver's seat is powered in 8 ways so there is full comfort for the driver but beware the car is somehow a bit shot heightened so the ones who are tall must think about it and it's got dull cruise control with safety in ABS and EBD and electronic stability control and it's got a 7-inch screen touch display to talk. Finally, its maintenance cost is around 3000 to 4000 bucks for the first time and if you talk about this SUV, in my opinion, it is the toughest SUV to give fair competition to Hyundai Creta and Renault Capture. 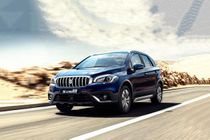