Maruti Alto is a key car built by Suzuki. Its selling points have long included a low price and good fuel economy. The model, currently in its eighth generation, was first introduced in 1979 and has been built in many countries worldwide. The Alto badge has often been used on different cars in Japan and in export markets, where it is considered a city car. 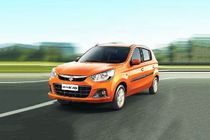