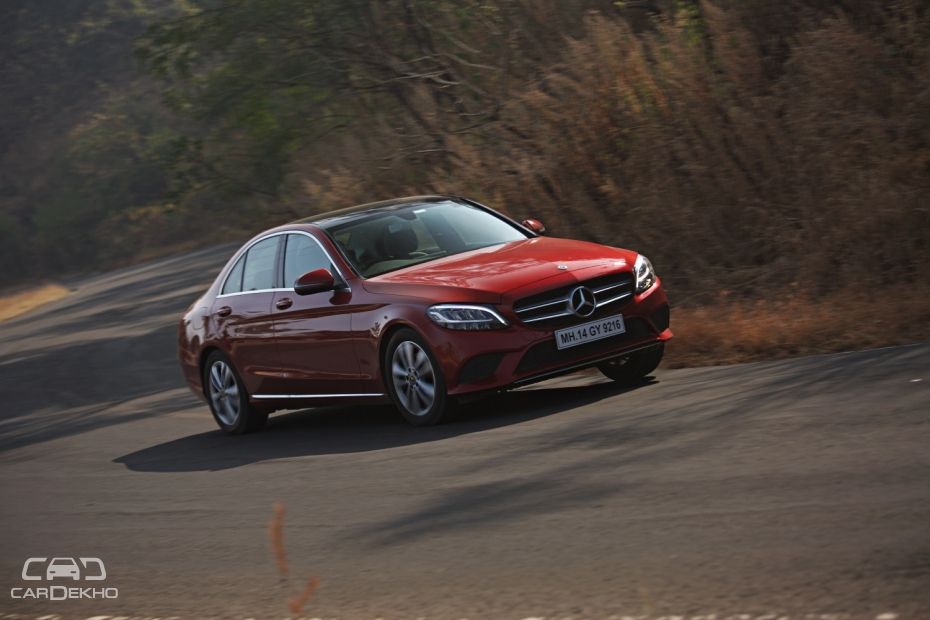 Launched in September 2018, the updated C-Class promises more flash, paired with added functionality. To top things off, there’s a BSVI-compliant diesel engine that not only makes more power than the outgoing unit but is also kinder to the environment. It looks like Mercedes has covered all bases then. Or has it?

With the update, the C-Class isn’t a biblically different car than before. It continues to look and feel posh, is built like a tank and has snob value like nothing else in the segment. The refinement of the new engine brings with it an added air of premiumness. Yes, we’d have liked some more features (say a 360° camera, ventilated seats, electric steering-column adjust) at this price point. But, other than that and slightly stingy room at the rear, we can’t really pick bones. It’s the good old C-Class recipe, just fine-tuned and perfected over time.

Among the first questions that will pop up when you see the C-Class in person will be ‘is this really the new car’? Even by facelift standards, the changes are subtle enough to go unnoticed by those not in the know. The dimensions remain unchanged and so does the basic shape and size of the headlamps and tail lamps.

Our test car was the top-spec Progressive variant of the C 220 d, which packs full-LED headlamps. Dare we say, it looks better than the ‘Multibeam’ LED setup the more expensive C 300 d AMG Line gets. It also lends the C-Class an angrier-looking face, that’s complemented well by the reworked bumper. With the central airdam growing larger and faux air vents moving upwards, the front now appears visually wider.

There’s no telling the updated C-Class apart from the old one from the side. Absolutely nothing new here save for the new set of 17-inch alloy wheels that are now standard. From the rear, the baby Mercedes apes not the S, but the mighty Maybach. The tail lamps get revised graphics, with a prominent C-shaped lighting pattern. And yes, if you’re wondering, it continues to get the chrome applique on the bumper that tries to imitate a set of exhausts.

We’ve always liked how Mercedes-Benz has managed to mimic the S-Class in a smaller, tighter package. And even with the update, that feeling lingers on. If we could describe it in a word, we’d pick c-l-a-s-s-y!

If you’re buying the C-Class thinking it’s a big, expensive car, it’s a Mercedes-Benz for God’s sake - it must have acres of space - then, you’d be mistaken. India doesn’t get the China-spec C-Class L (long wheelbase), so you have to make do with a cabin that isn’t particularly palatial.

For starters, you have to sit down inside the car. Those buying the car for their parents/grand parents, please take note. Once in, you see that the C-Class’ cabin is driver-centric. At the rear, there’s just about enough space for a six-footer to sit behind their own driving position. But, under-thigh support feels lacking, and the diving roofline gives rise to a shortage of headroom. Since Mercedes had to carve out the headliner to make space for the panoramic sunroof, the feeling of being close to the roof is amplified further. That said, anyone up to 5’10” should be comfortable here. But in case you’re taller, you’re forced to sit with your back at a sharper angle, which reduces kneeroom and under-thigh support further.

In the front seat, there’s ample room for you to get comfortable and soak in all that the C-Class has to offer. This may be an ‘entry-level’ Mercedes, but there’s practically nothing in the cabin that makes it feel that way. There’s thoughtful use of materials, including faux wood on the dash and the centre console, robust-feeling switches for the power windows and the air-con, knurled knobs for controlling the airflow on the vents and an abundance of soft-touch materials everywhere. It doesn’t look like Mercedes-Benz has missed a spot - even the lower half of the doorpad is soft to touch!

Under the bonnet of the C-Class is a new 2.0-litre diesel engine. This is the same engine we’ve seen in the E-Class. But here, there’s a key difference, it’s BSVI-compliant. It makes the same 194PS of power and 400Nm of torque, and comes paired with a 9-speed automatic gearbox.

Fire up the engine and the first feeling is that this new engine is noticeably quieter than the one it replaces. Get going, and this observation is only fortified further. Insulation has always been fantastic in the C-Class, and with the quieter engine, the experience is that much more enjoyable.

Driving the C 220 d is quite engaging. There’s no dearth of power, and the shifts from the gearbox ensure you are in the correct gear most of the time. Drive calmly and the shifts are imperceptible. And should you want to overtake, a small flex of the right foot is all it takes. You don’t have to wait for the vehicle to react, it obeys commands almost instantly. That’s until you try to hurry the gearbox, that is. Here you will notice the gearbox hiccup and falter at times. On inclines, for instance, it feels hesitant to drop gears, and dowshifts only when the go power feels inadequate. Also, if you want to shimmy out of your lane and slam on the accelerator for that quick overtake on the highway, you’d notice the gearbox taking a split second before downshifting.

Go all out, and the C-Class will hit 100kmph in 7.9 seconds. That’s a full second slower than the claimed 6.9-second time. The responsive gearbox makes its presence felt when you slam the pedal down in-gear. For instance, 20-80kmph takes just 5.02 seconds. Of course, both these times are in Sport+ mode, where the engine and gearbox are programmed to hold on to higher revs, even at idle. Other modes include Eco, Comfort, and Sport. There’s an Individual mode as well that lets you alter the behaviour of the engine, steering and ESP. You can set each to Eco, Comfort, and Sport.

Using the preset Comfort and Eco modes will see the car become progressively lazier. We re-did the roll-on acceleration tests in the other modes and saw the 20-80kmph take 5.45 seconds in Comfort, and 5.81 seconds in Eco. The go-to mode for us has to be Comfort — it provides a nice balance between drivability and performance.

This engine feels like it can munch miles for years together without batting an eyelid. And should you want to do that often, it’ll be happy to be kind to your wallet. Inside the city, the 2.0-litre engine returned a respectable 14.37kmpl, and climbed up to an impressive 21.40kmpl on the highway. It’s worth mentioning we were in Eco mode for the fuel runs. A fatter wallet makes up for the slightly dull throttle response.

While the engine offers enough to excite in Sport+, it doesn’t feel overwhelming at any point. If an overwhelming amount of performance is what you’re after, we suggest you look at the C 300 d instead.

Irrespective of the variant you pick, you get a host of safety tech. There are seven airbags (dual front, side, curtain, and driver’s knee), anti-lock brakes with EBD as well as ISOFIX child seat mounts. The C-Class also features an Active Bonnet that raises the bonnet from the rear hinges (with the use of pyrotechnics) to ensure it minimizes impact and risk of injury for a pedestrian. There’s parking assist as well that helps hunts for parking spots and also steers and accelerates to make parking that much easier.