Beast in the city

Hey the car mahindra xuv 500 is the one of the best car mahindra had ever made. It has space for every person in family and offers too much relaxation to the older ones . The quality is too good in this car, it is too fast that no person can follow you. The car itself is so clever . The most important is its looks - one of the most dashing car and now it also come with sunroof which children likes the most. The Mahindra XUV500 has been a run away success since its launch. This SUV was launched in 2011 and recently it got a facelift. The Mahindra XUV500 was one of the most feature loaded vehicle and now it comes with a lot more features and more trim options as well. The Mahindra XUV500 looks more appealing, more feature loaded and is now even available with a diesel engine option as well. This has been a revolutionary product in its segment and Mahindra has done a good job of evolving the design and even addition of new features. This was the first SUV in its segment to come with LEDs, touchscreen system, monocoque chassis and front wheel drive. The 2.2-litre mHawk engine produces about 140bhp of power and it comes with six-speed transmission. The new automatic transmission also on the XUV500 is highly efficient with smooth shifts and has good response too. One of the strong pointers for the XUV500 is its performance. The mHawk engine has sufficient torque at most of the engine speeds that makes it good enough to be driven on a daily basis. The power even on the highways is good enough.The 2197 cc Diesel - powered variant delivers a fuel economy of 14 kmpl in city and 16 kmpl on highways.The Mahindra XUV500 competes with the Hyundai Creta and the Tata Hexa when it comes to pricing. The XUV500 is offering seven seats instead of five, while the Creta feels more car-like and compact to drive. This segment has neck tight competition and Mahindra is offering one of the best set of features in its flagship model.The interior styling of the XUV500 has been refreshed. The interiors do look premium and this SUV has stylish looking instrument panel. The new black and beige dual tone combination makes the XUV500 feel a lot more premium then before. In terms of features it gets smart key, push button for start and stop, touchscreen music system with reverse parking camera, and even GPS. The other new additional features on the XUV500 are sun roof, climate control system, tyre-tropics, micro-hybrid and even regenerative braking.The Mahindra XUV500 has undergone a facelift. This new updated version of the XUV500 gets a new grille with the vertical slats getting chrome treatment, then there is also the new headlamps. The LED design on the headlamp has been changed. The XUV500 gets subtle updates at the rear as it now looks a lot more timid in design. There is no change on the side profile part of the XUV500. Mahindra XUV500 comes in seven colours, options which are Dolphin Grey, Moondust Silver, Opulent Purple, Pearl White, Sunset Orange, Tuscan Red, Volcano Black. In the last it is the beast that can beat any car. 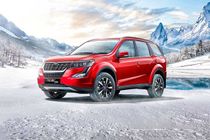