As we know Honda has introduced his first MPV Mobilio in 2012-2013 which is a mixture of brio but few years ago in 2016 Honda has launched his second MPV named Honda BRV,in 2016 i bought my second MPV honda BRV earlier i was using Maruti Ertiga which is our first 7 seater car but since i bought my Honda BR-V I am very happy and I am feeling very proud to own this MPV the BR-V has a lot of space inside and it is very smooth MPV to drive. This car offers me 6-speed manual transmission the variant. I  am currently using is VMT iv- tech variant this car offers me lots of power which is quite impressive for me the looks of this MPV is just great if see this MPV first time it feels like its an SUV from the front. The side portion of the car is similar to Mobilio if we see window line. the rear window is huge and offers a great view. The space inside the cabin is also at its best level the interior of this car is inspired by other Honda cars like jazz, city, wrv. The space in the third row is also quite impressive we can recline the third row seat to provide great comfort for third-row passenger even the third row up the space inside the boot is quite impressive and if the third row and second row is folded the space we get is very huge since I am driving this car from 2016 this car has never let me down in terms of power and space i had taken this car to many places like in hilly areas and through the bad patches of roads this car has performed very well. overall the Honda cars are well known for their driving comfort and fuel efficiency. 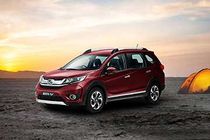