Mahindra XUV500 A Complete Rip off!

Mahindra, for the first time, has been able to manufacture a vehicle which is pleasing to the eye. However, don't let it deceive you. The vehicle may seem to be a premium offering on the first look, but as soon as you begin using the SUV, you'll realize that it is ridden with innumerable defects, which you don't expect in a vehicle of this stature. I bought the Mahindra XUV5OO in May 2012. The vehicle worked fine in the initially, however, as the days progressed the defects began to emerge. Firstly, the wipers failed to work. Thereafter the brakes were worn out in two months. Then the sunglass compartment on the ceiling of the vehicle had water filled in it owing to some crevices, which had not been patched up appropriately. The headlights stopped working and the electrical system in the vehicle is a complete failure. The quality of plastic used is far below its segment standards. The after sales service of Mahindra, particularly Bhasin Motors, is pathetic. My vehicle met with an accident on January 06, 2013 and till date, it has not been returned to me. They just don't have the competence or the professional setup to cater to a customer.

My XUV 5OO suddenly stopped in the middle of the city & clutch pedal was not coming back to the normal position. After some time I managed to put the vehicle in 1st gear & parked on the side of the road. The vehicle was towed to the nearby Mahindra workshop, 'TVS & Sons Ernakulam' and after a couple of days Mahindra dealer said that the clutch & flywheel are damaged and need replacement. The cost quoted was around Rs 40,000 and asked me to pay. My vehicle is still under guarantee, but the Mahinrda dealer 'TVS & Sons Ernakulam' has informed me that 'clutch & flywheel' are not covered under the guarantee. Even though the vehicle is done only 26,000 km, they say this is not due to manufacturing defect !!!. Moreover the spare clutch & flywheel are not available with the Mahindra dealer and I am waiting for the last 10 days to get it repaired and have no idea when the spares will be available and when this will be repaired. The Mahindra dealer advised me to contact Mahidra directly regarding the issue. When I contacted Mahindra, they advised me to contact the Mahindra dealer !!! Unfortunately I am one of the earliest owners of Mahindra XUV5OO and bought the car without waiting for the users feedback and got carried away with the looks & 'WORLD CLASS' slogan by the manufactures, Mahindra. 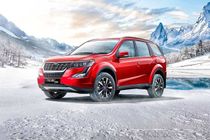