We bought nissan micra active xvs . it has a good performance and it is also fun to drive . sometimes even we all feel like a family . it is the best rival for hyundai i10 . compared to it it has better power , better interiors at its cost . after driving our car every one would say that our car is far better than their car . once my father was invited to drive his customers car it is tata tiago . he went to the spot in micra active and he drove the car and they asked for his comment my father told them to drive our car and after driving our car . he felt little worried as the sound of the motor did not come from our engine as it was so refined . he then told that he would had bought micra active if knew about it . as my father worked in bank after buying micra active who ever came to buy car loan in bank my father will them a ride and they will decide . like that nearly 10 micra active had been bought by the customers . before we had maruti alto which we had for nearly 9 years was bought on 04-05-2006 . it is a fancy date . do you agree friends . maximum of them will say yes . in many expeiences i would say that micra active is better in many ways . my uncle has a hyundai i10 magna . my father and my uncle drove both the cars and found many differences as the prices of both are nearly same . the i10 takes more stress to climb a bridge and gives a noisy sound but the micra active does not stress and does not make sound much and the sound does not come inside as it is beautifully insulated . the micra active is spacious than the i10 and bigger in size . on highway the nissan micra active reached 150 kmph at 4500 rpm . and gives 18 kmpl at highways and 16 kmpl at city traffic . it is easier to drive inside the city also . but i also have some negative review on micra active as it doee not have v shaped chrome grill in the bumper but it is in micra . it has a normal boot space so that it can store i big suitcase and a small suitcase . it has a dull steering wheel compared to micra . it has fabric seats but a leather would be preferred by me . it has nice features at xvs varient. for first buyers of cars micra active is always a good one as i said before it has value for money . 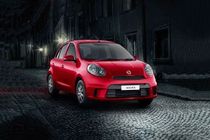