Ford Endeavour - The dream car for many craze guys including me. I took a test ride of the 3.2 version last year and when I was about to buy it. Ford has already upgraded to bs6 with a 2.0 engine. Initially was confused to buy the 2.0 bs6 version, but was later convinced to buy the same being a die-hard endeavour fan. Considering the fact, the smaller engine has less performance comparatively, but guys if you are driving in the city, Drive mode is really good. But on highways you cannot drive with Drive as overtaking is quite difficult. But guys if you switch to S mode and try manual gear shift the car goes like a Mad and in fact, u can compete for any car on the road especially at 7,8 and 9th gear and u can see it reaches 140 in a swift. Happy to be endeavour owner. In fact happier now as I have already bought the car before Ford leaves India. 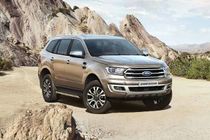