Audi has long set the standard for interior quality, and the latest A6 saloon shows it hasn't lost its touch in this area. The A6 is also a practical choice, thanks to its spacious interior and a huge boot, plus it promises affordable company car tax bills and the option of four-wheel drive. Along with the BMW 5 Series and the Mercedes E-Class, the Audi A6 is one of the most established models in the executive car sector. It's available as a four-door saloon and as an estate, known as the Avant. As with all Audis, the A6 has a smart, well-built interior, while under the bonnet there's a strong line-up of engines. This kicks off with the frugal 2.0-litre TDI diesel in the ultra model which is aimed at company car drivers with its 109g/km CO2 emissions and 67.3mpg claimed fuel economy while topping the range is the sizzling 552bhp, RS6 Avant. As mentioned, you won't be overwhelmed by its sparkle. For the last facelift, Audi ditched the eight-speed CVT slushboxes in all FWD A6s and replaced them with the seven-speed DSG (much better), and tweaked the auto stop/start to eke out better eco stats. But otherwise, it's business as usual. The steering is quick but inert and in the majority of cars sold in the UK (FWD), you're looking at some understeer when limits are breached. Stay away from the hairy end, however, and spec it right, and the A6 is actually very comfortable to do big miles in. It's nice to have the security of Quattro working in the background too. The entry-level 2.0-litre diesel is a decent engine (especially in upgraded, smoother ultra guise), but we'd advise you to go for the BiTDI V6, or indeed the Bentley-engined S6, which has 444bhp and will hit 60mph in 4.4secs. That car is a proper sleeper. Pros Roomy interior finished in high-quality materials; powerful engines that also achieve good fuel economy; intuitive technology interface makes high-tech features easy to use. Cons Missing some key features that are available on other cars in the segment; some of the navigation features can be a little too clever to the point of distraction. Up-to-Date Infotainment The centrepiece of the A6's dashboard is the MMI infotainment system. It works similarly to many infotainment systems in the luxury class there is a screen in the centre of the dashboard that you control using a knob on the centre console. There's no touch-screen functionality. The on-screen menus are easy to navigate, and the writing on the screen is crisp. Volume and temperature are controlled by separate knobs, and other major settings, like audio track selection, get their own buttons. Reviewers agree that the system is easy to use overall, though some say the systems in Mercedes and BMW vehicles are even more intuitive. As you step into higher trims, you get a dizzying array of cutting-edge features. Purchasing the Technology Package gets you an upgraded MMI infotainment system with a larger screen, navigation, a touchpad that lets you write out addresses with your finger, and Audi Connect, which provides a wireless hotspot that can support up to eight Wi-Fi-equipped devices and enables the navigation system to display Google Earth satellite imagery. The MMI has an upgraded processor this year, which improves response times and allows it to display sleek 3-D graphics. A head-up display, which projects your speed onto the windshield, and a night vision camera, add to the high-tech bonanza. The A6 is also available with Audi's upgraded MMI Navigation Plus system, which includes navigation, a touchpad with handwriting recognition, and Audi Connect. Audi Connect provides a wireless hotspot that can support up to eight Wi-Fi-equipped devices. It also enables the navigation system to display Google Earth satellite imagery. 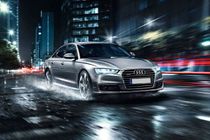