No Burglar alarm. You need to stand guard of this car

Rear seating is horrible. Not a family friednly car in any way. The absence of some basic features like the Absence of Burglar Alarm could casue serious problems. Literally like you need to stand guard for the car. I had the shock of discovering that my rear window was smashed open and my laptop bag and other contents were stolen without trigerring the merest alarm. When asked over the phone Audi service guys told us that this was not possible unless someone had deactivated the alarm from inside. THen they said that they needed to study the car to check why it did not respond to a serious security breach. Then finally after pursuing the matter for a week they admitted that it was not a standard feature and that they did not have any Audi genuine parts that were compatable with the car even as an add on feature. They ofcourse nvalidate the warranty if you choose to buy a third party burglar alarm system. When I informed them that this was contrary to what their salespeople had represented, they simply say "he is no longer with us". The obvious learning from this experience is that Audi salespeople are not entirely truthful about the absence of this basic feature. So be careful in accepting what they say about other features of their car. 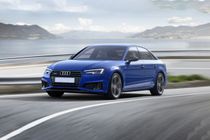