Volkswagen seems to have gotten most of the things right with its debutante entrant in the compact sedan segment. The Ameo can easily outsell its rivals when it comes to features. Volkswagen has loaded it to the brim. Even mechanically it comes with one of the best engine and transmission options. 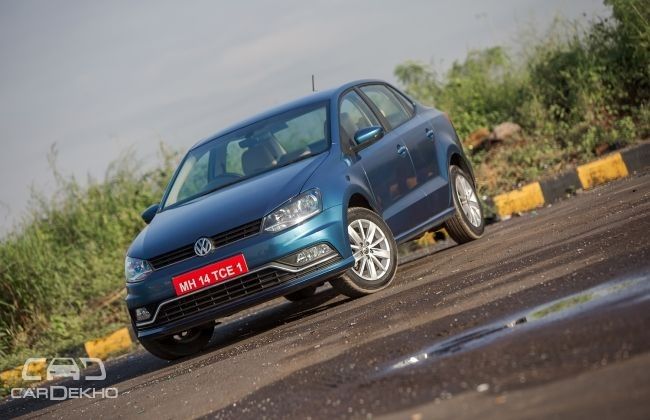 The Ameo is not a boot-pasted Polo. With the kind of built quality on offer along with potent engines under its hood, this sub-compact sedan from Volkswagen does stand out. Yes, it does reflect Polo’s identity but that again is not a bad thing at all.

"With a host of class leading features along with a mouth watering price tag, the Ameo makes for an amazing package. "

Considering its competitive price-point with regards to the several class-leading features on offer, it makes its own identity in this mass-runner segment. Ameo offers a solution to buyers who are looking to upgrade to a car that offers a premium look and feel at a price point that doesn’t put a big hole into their pockets.

It is hard to differentiate between the Polo and the Ameo, especially if you’re looking at the front profile. Although, its sub-4m dimensions allows it to qualify for fewer taxes, makes the car look disproportionate from certain angles. The same applies to the entire segment the Ameo belongs to.

As mentioned above, the front is a carbon copy of the Polo hatchback and there's nothing you have not seen before. To begin with, it features dual-barrel halogen headlamps and multi-slat grille. The re-styled front bumper which was offered with the Polo facelift has been lifted and now is also featured in the Ameo. The bumper comes with a chrome strip which runs along its length and the fog lamps come with static cornering lights.

Like the front fascia, the side profile is also similar to the Polo, up until the C-pillar. Things start to differ after the C-pillar as the company has incorporated a boot.  Furthermore, the production-spec Ameo features 15-inch alloy wheels, which are borrowed from the Polo — unlike the 16-inchers which were shown at the time of its debut.


The design is not a chop-job. VW has done a decent job of integrating the boot on the Polo profile.

Compact sedans do have a stubby boot and this in-turn makes them look disproportionately from certain angles. There are good and bad examples but no one has certainly perfected the art of incorporating a boot in restricted dimensions. The Ameo is no exception either!

On the brighter side, you do get an integrated spoiler and faux-LED graphics in the taillamps much like the Polo and the Vento.

Sit inside and you just cannot differentiate among the three cars — the Polo, the Vento and the Ameo. Almost the entire feature list is same, along with dashboard layout.

The overall design of the dashboard is not as flamboyant as you find with its peers, but it feels like the dash is built to last. The Ameo has received the flat-bottom leather-wrapped steering wheel with piano black inserts, which is also offered with the Polo and the Vento.

The Ameo's highlight is its new touchscreen infotainment system.

The Ameo’s highlight would be the new touchscreen infotainment system. Like any other of its kind, the system offers a host of connectivity options — Bluetooth connectivity, AUX-in, USB and also offers a screen for the reverse parking camera. Besides this, you even get segment-first MirrorLink support.

Speaking of the rear cabin, Volkswagen has used the Polo’s underpinnings and not the stretched version which the Vento uses.The space inside the Ameo is decent as compared to the Polo’s, which is not known of its rear legroom. However, Volkswagen has managed to make minor changes to the seat to make the rear of the car more accommodating than its hatch sibling .

The Ameo will be powered by a 1.2-litre MPI naturally aspirated petrol and a 1.5-litre TDI turbo diesel. Transmission options include a standard 5-speed manual, while the diesel will also come with a 7-speed DSG dual-clutch automatic transmission option.

The 1.2-litre unit in the Ameo churns out 75PS and 110Nm of peak torque, while the diesel is expected to put out 90PS and 230NM of max torque. The diesel powered Ameo’s specs have not been revealed by the automaker, however, it is said to get the updated 1.5-litre TDI oil burner. Initially, the German automaker has only introduced the 1.2-litre petrol.

This petrol engine doesn’t offer neck-snapping acceleration and frankly it’s not meant to do so either. However, it does offer a certain level of refinement but the low-end delivery is not as smooth as you would  expect. It does require constant throttle inputs especially when you perform an overtaking manoeuvre or if you are at an incline.

The diesel Ameo is poles apart compared to the petrol variant. Unlike the petrol Ameo that feels underpowered and lethargic, the diesel is quite a performer. The 1.5-litre TDI diesel engine gets an upgraded turbocharger, that has bumped its power up to 110PS, while peak torque is rated at 250Nm. There’s a hint of lag under 1500rpm, post which the Ameo diesel pins you to the back of your seat. Power delivery is seamless, and eggs you on to drive enthusiastically.

The short-throw 5-speed manual does well to add to the experience, but the hard clutch does take some getting used to. We preferred the 7-speed DSG, for its butter-smooth shifts and its ability to change personas at the drop of a hat. Drive sedately, and the automatic transmission shifts up early aiding fuel-efficiency. Go throttle heavy or slot into Sports, and the gearbox holds the revs right up to the redline letting you exploit all of the 250Nm.

The cabin gets noisy at higher RPMs.

Although, once you put your foot-down on the accelerator pedal, the engine does open up post 3000rpm and all the way to the red line. But, in result, you get a noisy cabin as the engine sound increases gradually. On the good side, the manual gearbox is a delight offering smooth shifts. The clutch is also quite light and nimble but it’s not as light as a Hyundai or a Maruti product. Speaking of the fuel efficiency, the petrol gets an ARAI certified mileage of 17.83 km/l, while the diesel will return around 20-21 km/l.

Thanks to a solid built chassis, balance and handling of the Ameo is sublime. Like other Volkswagen cars, the ride quality is on the stiffer side, but that is something that Volkswagen audience accept quite happily.

Dual-front airbags along with ABS is part of the standard kit.

This is one of the areas where Volkswagen usually scores over its rivals in most of the segments. The Ameo is the only vehicle in its class to come with dual-front airbags along with ABS (anti-lock braking system) as standard. The diesel automatic also offers ESP (electronic stabilisation programme) and Hill-Hold Control. The Ameo is Volkswagen's first Made-for-India offering and will compete with the likes of the Maruti Suzuki Swift DZire, the Hyundai Xcent, the Honda Amaze, the Ford Figo Aspire, and the Tata Zest.