Recently Toyota has launched the all-new Toyota Glanza , i think its not important to manufacture this car because before this car launched the Maruti had already launched Baleno which is not build with major differences like Glanza , so there are many differences Toyota makes in Glanza , the first & big change in these cars is Price, which is much difference between these two cars , the price of the Toyota Glanza is higher than the Baleno but the Glanza is at 7.28 lakhs which is little bit more than the Baleno"s price, but this Glanza is also the very good car & perfect for the small families, & the final thing I wanna say thanks to the Toyota company for manufacturing this all-new Glanza for Indian families. 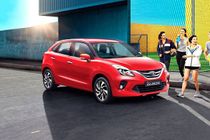