The Maruti suzuki Ertiga (also called Mazda VX-1 in Indonesia),launched way back in 2012 into the Indian Market is a leader in the very rapidly growing MPV trend in India.The credentials to its leadership are due to its amazing competitive pricing in this segment.The second advantage being the tag of Maruti Suzuki which it bears on it,which is well striken in the hearts of millions of Indians & gives a sigh of relief & satisfaction. The performance side too is equally strong,with it coming with the stupendous 1.3lire DDiS engine imported from Fiat.This engine is probably the best in class engine in terms of power,refinement & mileage it offers.Additionally like the icing on the cake,the 2016 Ertiga facelift is added with the Smart Hybrid Vehicle System (SHVS).This is the first MPV in India to come with a Hybrid system which is well ahead of its time. It gives an unbeatable fuel economy of 24.57 km/litre. On the interior side,it feels a lot airy with the biege interiors lightning up the atmosphere within the car.The quality of plastics used is also pretty good, with the cushions giving sufficient comfort for city & long distance journeys.The third row can be folded inorder to generate sufficient boot for luggage, with the 3rd row being adjustable. The puncy chromium exterior blended with lines & curves on the body are fantastic & resembles the looks of the pricey MPV's such as the Innova. The roof rails add more to the dynamics of the design & the headlight stretching back, with the bold chrome grille, gives it a commanding look on the exterior.The alloys are nicely designed with 195/55 R15 tyres & a wheelbase of 2740mm. On the safety front it comes equipped with ABS & Airbags in the front.In addition to the ABS,it also has EBD for better brake force distribution. The roof beams give additional strength to the roof. It is one of the 2 vehicles of Maruti Suzuki, with Ciaz to have passed the Crash Test, which is a big milestone for a company like Maruti Suzuki. Presently, the Ertiga faces competition from Honda's Mobilio, Renault's Lodgy, Chevrolet's Enjoy. But the Sales figures suggest that Ertiga is a clean winner. The service network is well spread out & the spareparts also being economical & maintainancefree, it proves to be the most preffered one amongst its competitors. The verdict, now is that the Maruti Suzuki Ertiga clearly is a winner in the features it offers at this price range. It is a powerpacked deal. The areas where it could be improved is ,in increasing the engine displacement inorder to pull a greater load very linearly,i.e,the Ertiga should also be powered with the 1.6 DDis powering the S-cross & the upcoming Maruti suzuki Ciaz in 2017. Apart from all these Pros & Cons,the Ertiga above all factors caters to all the needs & aspects of the Indian consumer,which He/She expects for a comfortable & lovable journey. Hence the bottom line 'Life Utility Vehicle' adds the human touch to this car. 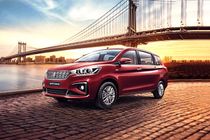