I personally have been using the diesel  Hyundai i20 which is powered by the 1.4L turbocharged engine. The variant I have is Asta manual. So I'll be honest about how the car really feels. When it comes to features, safety, electronics, looks and premium, then this is the right choice but there are some sectors in which I really feel that this car could have done better with. And the first one is rear-seat legroom, the rear seats are comfortable but they don't offer much of legroom, as I'm 6 feet tall so my legs keep on brushing with the front seats so it really is not a car which you would like to be driven in whereas some rivals such as Baleno offer way too much of legroom when compared to the i20. The second thing which disappoints me is the engine, though it is a 1.4L turbocharged diesel and churns out great numbers of performance on paper when compared to the rivals, in reality, the car really feels sluggish. If you are driving in city then there are not many issues with this car but out on a highway it really lags behind and the reason being is the linear fashion in which the car picks up revs, I mean there is no kick as such from the engine as you would expect out of a turbocharged engine and ofc. when the engine is creating such good numbers. Whereas I've driven the Polo, Baleno, Swift and Aspire as well and the i20 comes nowhere close when compared to the feel and the kick delivered by these cars. The Baleno and swift come with a smaller engine but the way in which the engine pulls makes them feel way too strong as compared to the i20. So, guys, that's my review of the i20 and I'm posting this after 2 years of personal use. So this is what I do feel about the car, rest I don't have any issues with it and overall it is a great car. 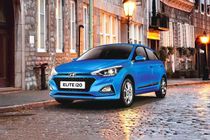