Think of any sports/performance/supercar in India and the first thing that comes to mind is speed, acceleration that makes you scream in excitement, and, of course, their hefty asking price. However, one question that many people ask is, can you actually live with one of these cars in India? Enter the Ford Mustang, a fast car that sells more in the USA than the Honda City does in India.

The Mustang is an icon, a machine that invites envy, but most importantly, a performance car that people use every day. So we spent around a week with the pony car, taking it on a family road trip, driving it through broken semi-urban roads and through crawling city traffic to see if that nature holds up in India. 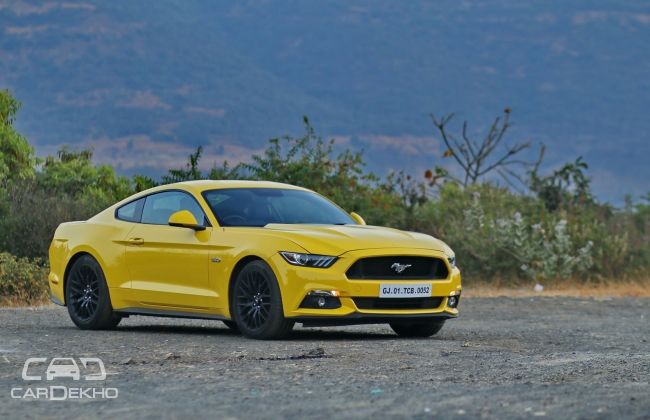 The Mustang is all about taking you back to a simpler time. It reminds you of your bedroom wall poster, your toy cars, and is the most affordable new car you can buy in India with a V8 engine.

"With its price in India, it loses its placement as an affordable performance car, but that money buys you something special"

; it buys you an icon, a statement like no other and most importantly, a car that can make you feel like a kid again.

It’s taken six generations of the Mustang to come out for the muscle car to finally be offered in right-hand drive. Even though India had to wait for far too long for the Mustang’s launch, none of that old school charm has been lost.

Every inch of the Ford Mustang is pure bulging muscle and with a length of nearly 5 metres, a width that’s greater than even the Ford Endeavour’s, the street cred and road presence can count as a feature on the brochure.

Swing yourself into the driver’s seat and the first thing that’ll bring a smile to your face is the big bonnet up front, a rare sight on cars these days. What’s quite surprising is that the overall visibility is quite good, with the only flaw being the wing mirrors that should’ve been at least two sizes larger.

Speaking of size, the Mustang’s been designed to accommodate people with bigger frames. So, even people who are over 6ft tall and have a hefty build will be comfortable and well-supported in the large seats. Not to mention, technically, the Mustang is a four-seater. However, the rear seat is best suited to small children. Not only is there limited legroom and headroom available at the back (even adults of an average height will find their head touching the windshield), accessing the rear seat is difficult because of the sloping roofline and narrow space to get in.

What’s really amazing, though, is how Ford has retained the original 1964 Mustang’s design traits over half a century later. You get a three-spoke steering with a round horn pad in the middle, a twin-cowl dashboard and even retro-styled toggle switches to operate functions like the drive modes (Normal, Sport+, Track and Snow/Wet), steering modes (Normal, Comfort and Sport) and traction control.

Despite all these vintage elements, the interior comes loaded with modern must-haves like electrically adjustable seats, one-touch up/down windows, cruise control, two-zone climate control and a touchscreen infotainment system. Does it feel futuristic? No. In terms of quality, it isn’t cheap, but it doesn’t feel premium either. There’s a lot of hard plastic trim used all over and it reminds you that while the Mustang is an expensive car in India, it has been built as an affordable performance car. There’s not much to complain about, but the fit and finish quality isn’t on par with a similarly priced German luxury sedans.

While the Mustang is available with multiple engine options globally, it’d be almost insulting to not get the full-fat 5.0-litre V8. So, that’s exactly what we get! Fire the engine up and what you notice first is that the engine is quite muted. There is a bassy gargle when it’s idling, but it’s not loud as you’d expect a traditional muscle car to be. Blame it on emission norms or noise regulations, but you do wish the car sounded a bit more ferocious.

Before we get into the drive experience, the one thing you should know is that the Mustang isn’t a car for someone who likes to go unnoticed. Drive this muscle car anywhere and if there’s a camera nearby, it’ll probably turn your way, and some may even follow you to get more pictures. However, if someone does get too close for comfort, just slam the pedal and watch the 515Nm of torque turn everything behind you into a blur.

The engine produces 401PS of power and while that’s a big number too, it’s all very easy to manage. The performance won’t slam your head into the headrest as all the Mustang has to offer is delivered in a linear fashion. As long as you respect the fact that this is a powerful car, you can genuinely enjoy its performance in everyday conditions. We managed a 0-100kmph time of 5.36 seconds which is quick, but not mind boggling.

The India-spec Mustang has been detuned so it can run on regular petrol. As a result, it makes less power than its international counterpart, but on the positive side, it isn’t limited by fuel octane rating/quality requirements – something that otherwise becomes a big problem for high-performance cars in India.

Even the six-speed dual-clutch automatic gearbox offers relaxed gear changes and isn’t jerky. However, it isn’t as responsive as you’d like it to be when you’re looking at spirited driving. Slam the pedal down or use the paddle shifters, the gearbox just isn’t lighting quick. If you’re looking at full throttle driving, the lazy response will get annoying and yes, you do wish Ford India offered the manual gearbox, but for cruising, it’s fairly comfortable by performance car standards.

The Mustang offers a comfortable ride for a car in this class. After testing the car in India for over 1,000km through everything from national highways to narrow bylanes, we can attest to the fact that you can actually use the Mustang as a daily car even in India. It even gets 137mm of ground clearance, which isn’t much for our country, but through our test, not once did it scrape even larger speed breakers.

You even get a big 60.9-litre fuel tank, though with an in city efficiency of 4.6kmpl and a highway economy of 7.46kmpl, you will get through that tank quite quickly!

Older versions of the Mustang haven’t enjoyed a good reputation for handling, but the sixth-generation model isn’t much of a handful.

It isn’t dynamically perfect, but there’s a sense of excitement and occasion while driving the Mustang.

Even pushing it through corners is fun, especially since the steering is well-weighted and communicative. However, it isn’t as nimble as a BMW Z4, Audi TT or Porsche Cayman, as you can feel the car’s weight when you exit corners at high speeds.

For safety, the Ford Mustang comes equipped with dual front, side, curtain and knee airbags, ABS, ISOFIX child seat mounts in the rear seat, rear parking sensors and a reversing camera – all as standard.